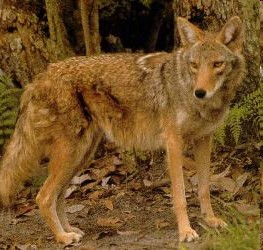 Bigger then coyotes, smaller then wolves. Coywolf is not hard to pick out from Coyotes. “They are larger, both in terms of body size and skull dimension,”. Their skulls are especially wide compared with their length. Male coywolves are larger than females, while coyotes are not. Coywolves also tend to be more variable in terms of color, with red, dark and light morphs.
Coywolves tend to hunt larger prey than coyotes do, scavenging or actively seeking deer, for example, which is possible given the coywolves’ larger size.

Coywolves even sound different. Their vocalizations are deeper than western coyotes. They readily make use of forest habitat, while western coyotes tend to avoid it and prefer open areas.

“This is an evolutionary mechanism to generate new variation that can work faster than genetic mutation,” added Kays, curator of mammals at the New York State Museum.

The study, outlined in the latest issue of Royal Society Biology Letters, reveals that some of the largest specimens were indeed coyote and wolf hybrids.

Given where these animals came from and the degree of documented genetic diversity, the researchers can tell that a few coyote females mated with male wolves north of the Great Lakes.

Wolves often persecute coyotes rather than breed with them, so it’s still rare for these distinct, yet related, species to make love and not war.
The same holds true for dogs and coyotes. Generally coyotes kill dogs; dogs avoid coyotes, but interbreeding does sometimes occur, although very little DNA evidence has been found for it in the Northeast. Coy-dogs are more common in the Southeast.

Earlier this year, University of Calgary professor and wolf expert Marco Musiani determined that human breeding of dogs led to a dominant gene for dark fur to be spread, through interbreeding, to wolves. Black fur is now commonplace in wolf packs.

Climate change has diminished snow in northern environments. White wolves used to benefit when snow was more plentiful, but now black fur provides them with greater stealth when the wolves hunt in snowless places.