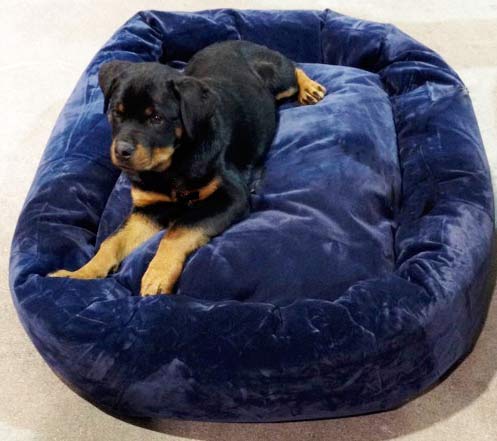 Rottweilers can weigh from 70 to 130 pounds plus and height of 23-27 inches. Rottweilers are tough dogs but can be really silly too. Our studies conclude that Rottweilers like to curl when sleeping based on their tight muscular body structure and their need to nest. The picture above is the large oblong and great for puppies to geriatric. For Rottweilers that are larger and over 85 pounds, the extra large will provide more stretch room and weight support.

Our canvas is most durable and popular among the breed due to their tough nature, big paws and need to scratch their nose everywhere. The mcirovelvets is also great because they are softer to the touch, yet very durable.

For senior Rottweilers, the memory foam mattress is optimal and provides the best long term support for pressure points. More on memory foam.

The dog daycare I take my Rotty to had these beds all over their facility, and I could see from the way the beds were used so much that they really held up, so I decided to buy one for my female Hunter. The bed is really well made and it arrived in no time. I give it 4 paws up.

My best friend introduced to me mammoth and I couldn’t thank her enough for the recommendation. She has 2 dogs and 2 mammoth dog beds and every time I went over with my dog he’d immediately go lay in one of the beds he loved it so much. I got my Rottweiler when he was only 6lbs so I didn’t want to spend a lot on a bed until he got a little bigger. I was blessed to get some beds from family members, but eventually he outgrew them all. I finally decided it was time to fork over the money and get my companion what he deserves. It was the best investment for my pet!!!! I especially wanted a mammoth bed due to the Rottweilers and joint problems being so closely related. My Rott absolutely loves his bed. Even if I ask him to come sleep with me he prefers his bed (& to be honest I do too). I find myself laying next to him in his bed every morning when I wake up to give him a belly rub & it’s so comfy for me too!!! My dog is currently 112lbs and still growing (only 13 months old). Even at his currently weight he does not fill into the entire bed (I got him the extra large dog bed – oblong collection 55 x 42). Best dog bed EVER!!!! 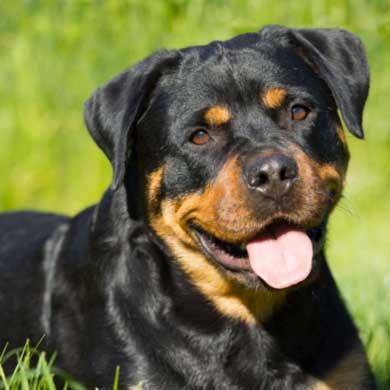 The Rottweiler was named after the city Rottweil in Southern Germany. This was called the city of red-roofed Roman villas ‘das Rote Wil’ when it was conquered by the Romans. The descended from a Roman-Mastiff dog the Molossus. Originally used as herding and driving cattle dogs, their job was to guard the cattle at night and drive them for miles during the day. The need to control strong cattle like bulls meant the breed needed to be strong and sturdy. The breed was first developed in 1899 in Germany. When the cattle herding industry was no longer, due to the introduction of the railway system, this breed took up cart driving for butchers and pulled carts of meat. The Rottweiler also protected their master and the money bags which were tied around their necks from thieves on the long trek home. Once the herding jobs were replaced with trains and the cart pulling was replaced with horses and donkeys, the breed almost went extinct with only 1 female to be found in the town of Rottweil. The Germans revived the breed in 1907 to safeguard the purity, appearance and work qualities of the breed. Today the Rottweiler is used as police dogs, boarder patrol and in the army

Rottweilers are incredibly loyal and obedient, which makes them superb watchdogs, and they will protect their family fearlessly, they are very territorial. When properly trained, socialized and exercised from puppyhood, this breed is an even tempered and dignified companion. They do not like strangers, it is important they understand the difference between friend or foe. This is where socialization is crucial, otherwise fear can lead to aggression. Proper exercise is important to keeping your Rottweilers temperament neutral.

Terrie, the 4 year old female Rottweiler broke the record for UK’s largest litter of Rottweilers. She gave birth to a staggering 18 puppies! Double the average size. It is likely a genetic trait that Terrie will pass on to her litter. The proud mother of 18 needed a midwife to help with the delivery and feeding of the 18 pups, since females only have 10 nipples.

Training should begin early, before any bad habits can develop. Socialization should also be conducted early and often. This large breed often exhibits dominance and assumes he is the one in charge of the house. Rules and boundaries must be enforced with 100% consistency – if you give a Rottweiler an inch, he will take a mile. Training should be conducted with confidence and firmness, but never harshness. A Rottweiler needs to respect you in order to accept leadership from you, and his response to anger and physical punishment is to disregard you as the leader and assume the role himself. They are well suited for agility, their job of origin.

We always love to hear stories about your Rottweiler, share a tale with us.