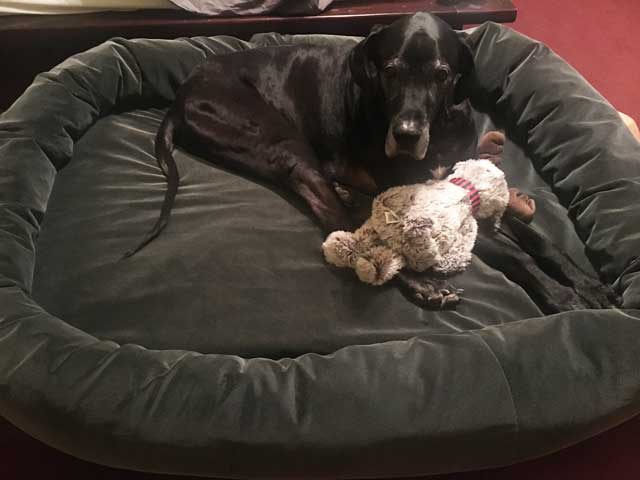 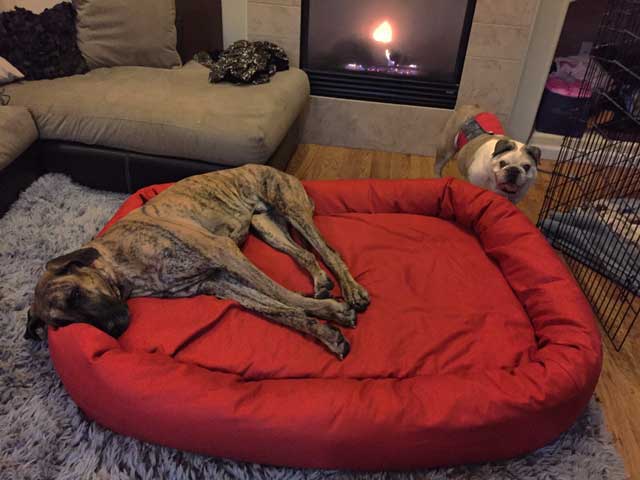 Mammoth introduced the Great Dane dog bed to cater to their size, shape, silly demeanor and couch potato personality. Whilst the great Dane is known as the “Gentle Giant” breed. Mammoth made this bed specifically with the Great Dane in mind for its rugged wear, luxurious fabrics and solid support. This bed delivers the ultimate in size, comfort and durability. And comes in two sizes to serve your needs.

The XL for those under 200Lbs. offers a supportive orthopedic foam mattress specially designed to support their weight night after night. This Great Dane in the picture below, completely fits into the extra large oblong 55 inch x 42 inch. For the giant Great Danes who reach larger height or require just a little more space, the extra extra large 72 inch x 55 inch was created, and can easily fit 2 Great Danes. The XXL was designed with a higher bolster wall surround, standing 10-12 inches high to completely support their head and cradle their neck. Both the XL and XXL offer an orthopedic foam mattress to support their large frame, there is also the option to upgrade to the memory foam mattress to provide superior support and comfort for your Great Dane. Have an elderly or incontinent Dane? We also offer the nylon liner to protect the mattress from soilage so your Dane will never be without his bed if he has an accident.

Mammoth beds were specifically designed for Great Danes, made durable while providing superior support. Composed of a removable gigantic orthopedic foam mattress for travel, and a cozy ring for support. The covers remove easily with a trouble free hook and loop fastener, located on both the mattress and outer ring. Our specially engineered filling is made from a non-clumping, hypo- allergenic, high memory virgin industrial fiber fill. Which offers orthopedic and long-lasting qualities on the bolster, and is 100% machine washable.

Choose from an industrial strength upholstery canvas, denims and microvelvets which are a polyester/cotton construction. The upholstery grade material is made to withstand the daily wear and tear of your Great Dane, and looks better with every wash. Only the highest quality thread is used to create a professional double serge for added strength. Don’t settle for less. When it comes to superior quality, no other bed compares to a Mammoth, for your Great Dane needs.

We guarantee you will want a second. 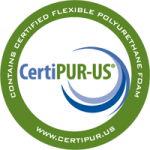 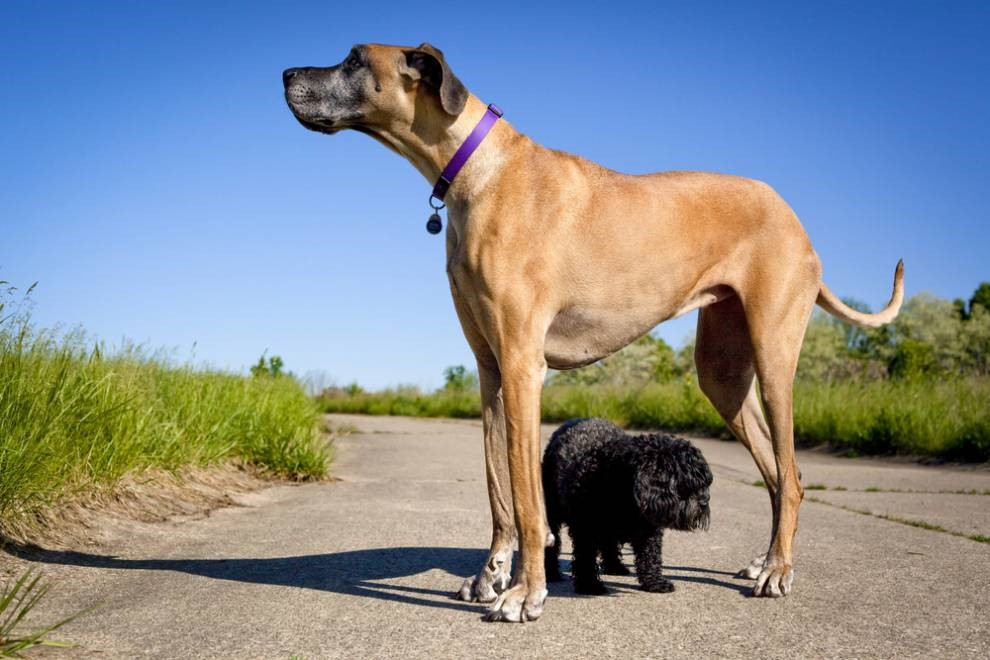 The Great Dane dates back to 3000 BC with pictographs on Egyptian tombs. They were used in the Celtic and Germanic army as fighting dogs and to catch large game during war, also know for wild Boar hunting. These dogs were already used in Britain, Greece and Rome, yet the Germans wanted to claim origin rights to the dog, which we believe originally dated back from Denmark. The name Great Dane literally means Big Danish. Their lines descended from the Mastiff breed and are often called German Mastiffs in Germany. The Breed eventually made it’s way over to the United States in 1877 where the breed was displayed at a dog show. The breed was ferocious in nature coming straight from Germany as attack dogs to guard wealthy estates. Todays Great Dane can be credited to the American breeders for creating a more gentle, even tempered line of Great Danes

They are a true working breed with a protective nature. The Great Dane is a people oriented breed that is playful and even spirited, affectionate, loving and a real family companion. They are of average intelligence when it comes to the dog world, however they have a real yearning to please.

Did you know both Scooby Doo and Marmaduke were both Great Danes? Known for their clumsy, cowardly behaviour and the ability to sniff out a good mystery. Dane’s were once thought to ward away ghosts and evil spirits. Doesn’t that sound like good ‘ol Scoob’s? Today Dane’s tell a different story, their personalities are known as the “Gentle Giants” and make a great addition to any family with their docile demeanor .

It is recommended to socialize your puppy at a young age to get them well accustomed to different people, places and other pets. Many puppies see small animals and toddlers as their peers and, therefore, need to be trained what is and is not acceptable behavior so they learn to respect everyone in the household. Training on the leash must be gentle, as leash-jerking and harsh discipline can cause an edgy distrustful pet. Due to their size, training such a large breed requires a firm hand along with positive reinforcement with this breed, they bond well with a human. Because they grow so rapidly they are not to be jogged until after 2 years of age to prevent joint and bone disorders caused by overuse. They generally require little space compared to their size and fair well with just a leash walk. Owners of the breed are cautioned to have a high fenced in yard to protect from theft or easy escape, as they are a hunting breed they enjoy chasing small animals.

We always love to hear stories about your Great Dane, share a tale with us.